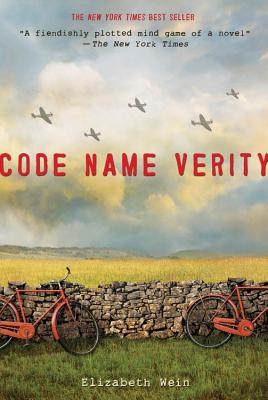 Oct. 11, 1943
A British spy plane crashes in Nazi-occupied France.
Its pilot and passenger are best friends.
One of the girls has a shot at survival. The other has lost the game before it's barely begun.

When "Verity" is arrested by the Gestapo, she's sure she doesn't stand a chance. As a secret agent captured in enemy territory, she's living a spy's worst nightmare. Her Nazi interrogators give her a simple choice: reveal her mission or face a grisly execution.

They'll get the truth out of her. But it won't be what they expect.

As she intricately weaves her confession, Verity uncovers her past, how she became friends with the pilot Maddie, and why she left Maddie in the wrecked fuselage of their plane. On each new scrap of paper, Verity battles for her life, confronting her views on courage, failure, and her desperate hope to make it home. But will trading her secrets be enough to save her from a merciless and ruthless enemy?

Harrowing and beautifully written, Code Name Verity is the story of an unforgettable friendship forged in the face of the ultimate evil.
Reviews from Goodreads.com

Elizabeth Wein gives readers a sense of being a prisoner in a Nazi Stalag during World War II in her book “Code Name Verity.” Though the story is not autobiography or a biography based on a well-known person or a distant figure from the Second World War, Wein writes the story in first person and narrates the tale though excerpts taken from a diary and illuminating the reader through piecemeal vignettes.

The topic is of historical significance, though Wein’s method of relaying her invented tale to audiences results in a tangle of confusing identities and scenes being drawn out causing the plot to lose the reader in the maze. Wein strives to show women’s role in assisting the RAF (Royal Air Force) in Great Britain through satellite organizations such as the WAAF (Women’s Auxiliary Air Force) and the Civil Air Guard, which both really operated during the war.

The main character or focus of the diary entries is Margaret Brodatt, Maddie for short who is written about in third person. She learns how to fly by training with a female aviator, Dympna Wythenshawe, who becomes a ferry pilot, meaning she’s a courier for the RAF. The reader enters the story at the point when Maddie is inside a Nazi Stalag and has decided to reveal everything she knows about England’s war efforts in exchange for another week of staying alive. The reader finds out later that Maddie is one of the taxi pilots for the RAF and her plane crash lands in Nazi-occupied France. She is taken prisoner along with a member of the French Resistance named Jacques.

She chastises herself for betraying the Allies though the reader is never actually exposed to the information she reveals to Captain von Loewe of the Stalag that the Germans don’t already know. She underlines specific sentences in the dictation which leads the reader to believe this is information which the Allies will be able to use to infiltrate enemy lines.

There is confusion as the identity of the prisoner narrating the story. At first, it seems she is Maddie’s friend Queenie, then she admits to being Maddie, and then she claims to be Julie Beaufort-Stuart. The book is divided into two parts. The first part comprises of the scenes from Maddie’s cell at Chateau de Bordeaux or as she calls it the Castle of the Butchers. She chronicles her memories, her captors exploits, and her attempts to kill herself. This part concludes with von Loewe sentencing her to death by lethal injection.

The second part of the book back tracks and tells how Maddie assumed the identity of Julie Beaufort-Stuart. Maddie was not cleared to be in France but Julie was. This part ends with Lady Beaufort-Stuart of Castle Craig in Scotland writing to Maddie letting her know she’ll keep a window open in case Maddie returns.

It’s a touching finale to a tale whose protagonist has an unclear identity and an unclear conclusion. Pieces here and there enlighten readers about the Allies war efforts and how the Nazis used propaganda to sway public opinion in their favor. The tale may have been invented but it’s fathomable that some place in World War II’s history, a Maddie Brodatt and a Julie Beaufort-Stuart actually existed.

It’s uncanny how in the book the personality of American broadcaster Georgia Penn shows similar traits to a character portrayed in the late ‘60s TV comedy “Hogan’s Heroes,” who was based on the real life Rita Zucca and Mildred Gillars nicknamed “Axis Sally.” How can two writers from different generations write similar characters unless such a character had existed and was spoken about by word of mouth? Perhaps Maddie and Julie were also spoken about by word of mouth as well. It’s not unbelievable.

Code Name Verity is the sixth novel by British author, Elizabeth Wein. It tells the story of a pair of British women who crash-landed in France during World War Two. The first part is narrated by Queenie aka Scottie aka Eva Seiler aka….., a Special Operations Executive agent, and is written under duress at Gestapo HQ in the town of Ormaie in November 1943. SS Hauptsturmfuhrer Amadeus von Linden has forced from Queenie wireless code for the eleven wireless sets found in the wreck of the plane from which she jumped. What then follows, at his command, is Queenie’s account of the course of events that led to their flight to France and incorporates in that her friendship with Maddie Brodatt, the pilot of the downed plane. The second part gives Maddie’s version of events, and reveals that perhaps one of the narrators is not entirely reliable. Wein’s characters are multi-faceted and realistic: they all have their weaknesses and faults; even the evil ones possess a human side; many are not quite what they first seem. The dialogue, too, is credible and the plot is totally plausible, twists, turns and all. Wein’s extensive research is apparent on every page: a wealth of information is secreted in the story in easily digestible form. There is humour, heroism and horror, and enough heartbreak to bring a lump to the throat of even the most cynical reader. This is a tale of friendship and courage that is interesting, informative and ultimately, very moving