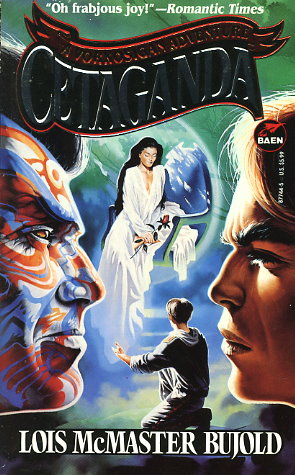 Share:
Cetaganda is the latest installment of the Hugo-award winning adventures of Miles Vorkosigan, in which Miles and Cousin Ivan go to Cetaganda to play the part of sprigs of the nobility doing their diplomatic duty by good old Barrayar. The idea is that they will gain diplomatic polish on this simple mission, but when the Cetagandan empress dies naturally and her lifelong attendant dies unnaturally--apparently a suicide, but there are rumors--Miles and Ivan find themselves in the thick of it.

Miles tries to play detective in a strange, complicated, and deceptively alien culture, while handsome and lascivious Ivan manages to get himself involved with several noble females at the same time--a diplomatic no-no of the first order. As the plot thickens, it becomes clear that to fulfill a boyhood fantasy and save the Empire, it's up to Miles to do the job. He doesn't mind exactly, but...the Cetagandan Empire?