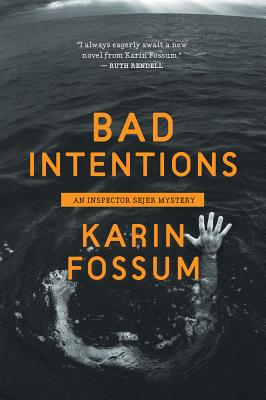 Share:
In the wake of Stieg Larsson's best-selling novels, readers are discovering the rich trove of modern Scandinavian crime fiction. If you've devoured the Millennium trilogy and are looking for your next read, Karin Fossum and her bone-chillingly bleak psychological thrillers have won the admiration of the likes of Ruth Rendell and Colin Dexter (of Inspector Morse fame).

In Bad Intentions, the newest installment in the Inspector Sejer series since The Water's Edge in 2009, Konrad Sejer must face down his memories and fears as he struggles to determine why the corpses of troubled young men keep surfacing in local lakes.

The first victim, Jon Moreno, was getting better. His psychiatrist said so, and so did his new friend at the hospital, Molly Gram, with her little-girl-lost looks. He was racked by a mysterious guilt that had driven him to a nervous breakdown one year earlier. But when he drowns in Dead Water Lake, Sejer hesitates to call it a suicide.

Then another corpse is found in a lake, a Vietnamese immigrant. And Sejer begins to feel his age weigh on him. Does he still have the strength to pursue the elusive explanations for human evil?