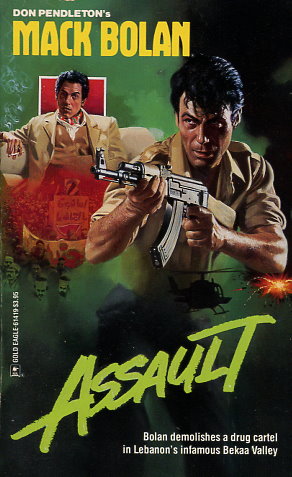 A terrorist hunt through the streets of New York puts Mack Bolan on to a much more urgent crisis. A Shiite-Mafia drug connection, ruled by a powerful cartel of fanatics and independent warlords, is preparing to supply huge quantities of bargain-basement drugs to bring Iran's holy war right to America's doorstep.

Posing as a maverick heroin dealer, the Executioner stages a raid that begins in Cyprus and ends in Lebanon's deadly Bekaa Valley, where unwelcome visitors never leave alive. Bolan enlists the aid of rebel factions on his desperate mission to destroy the cartel at its stronghold.

Those who profit in war and human suffering are about to discover the high cost of living ... and dying.
Reviews from Goodreads.com