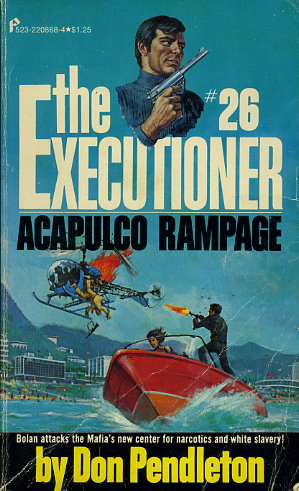 Take the most chic resort city in the Western Hemisphere, add some of the better-known names in American show biz, throw in a collection of top international politicians and industrialists, season the pot with a congress of the planet's most beautiful women, stir well with liberal dashes of terror, intrigue, and unrestrained power ... and what do you have?

Mack Bolan calls it a recipe for rape, with the entire civilized world as the intended victim.

The setting is Acapulco, the time is now, and the action involves the Executioner's finest hour... and perhaps his final one.

Sex, drugs, show biz politics -- whatever turns the world on is business as usual forthe ironhanded men who rule the world's invisible kingdom ... until Mack Bolan explodes onto the scene -- and then it's death as usual for all who fall into his gunsights as the recipe for rape produces a boiling pot of rage for the indomitable man in black.

Once again it's Mack Bolan in rampage ... while all of Mexico trembles!
Reviews from Goodreads.com