A Season Beyond a Kiss — Kathleen E. Woodiwiss 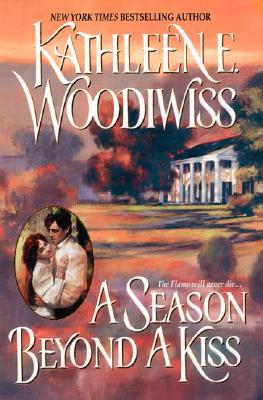 Share:
Her marriage to dashing American shipping magnate Jeff Birmingham signals the beginning of a wonderful new life for Raelynn Barrett. In the loving shelter of her husband's embrace, the pain of loss is diminished, as is her anger over her family's tragic and undeserved disgrace. But try as she might, Raelynn cannot close her ears to the cruel accusations and whispered rumors about her new spouse that buzz around her head like bees. And she cannot deny what her own eyes see, though the images before her seem to brand her darling Jeff as the worst sort of criminal, forcing her to flee his desire and his love.

Yet Jeff knows he is innocent---though he is unaware of the conspiracy that has shrouded his marriage in secrets and now imperils it with lies. And he will oppose the treachery with every fiber of his being in order to preserve his threatened happiness---to win back the trust of the woman he cherishes...and secure his place forever in his beloved Raelynn's heart.