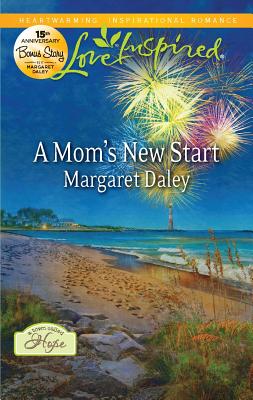 Stronger For Her Son

Years ago, the death of her soldier fiance left pregnant Maggie Sommerfield devastated and angry. Now she needs help with her troubled preteen son. Enter counselor Cody Weston, who is in town to help the community deal with the aftermath of Hurricane Naomi. He also happens to bring just the comfort and support Maggie needs. But it turns out he has a few secrets of his own. Will Cody and Maggie be able to open their guarded hearts to find a new beginning?

A Town Called Hope: In the face of a hurricane, a town bands together
Reviews from Goodreads.com

This is the final book of the series. Maggie Sommerfield and Cody Weston, whom we met in the previous book, meet in an elevator. The opening scene is a bit funny and sweet since Cody, the psychologist, realizes that Maggie has a fear of closed places after the elevator gets stuck! After that, the couple are thrown together for different reasons. Maggie's twelve year old son is having issues with depression like his great Uncle did, and she's worried. So Cody decides to talk to him and see if he can figure out the problem.

There is a sad little dog in this story that the Sommerfield's adopt. He lost his two back legs during the hurricane. This dog plays a pretty important part in the story. Cody is a counselor, but he has his own secrets and haunts. While he tries to help Maggie and her son with theirs, he finds Maggie helping him with his. But he doesn't know if he's ready to settle down or not. There's also Cody's sister who shows up at his apartment, pregnant with twins. He's always cared for her and isn't keen on the idea of leaving her behind when he leaves to go to his next job.

So many issues, and they are all wrapped up nicely at the end of this story.

Also in this book (not sure about the Kindle), a small Love Inspired Suspense short story is included. Since I'm almost done reading all the Love Inspired books and am about to start the suspense ones, I was excited to get a taste - and this is only a taste. The story is only about 40 pages long, but it's a sweet story. You can't expect much from such a short story that puts romance and suspense together, but the author did a pretty good job...