A Lady of the West — Linda Howard 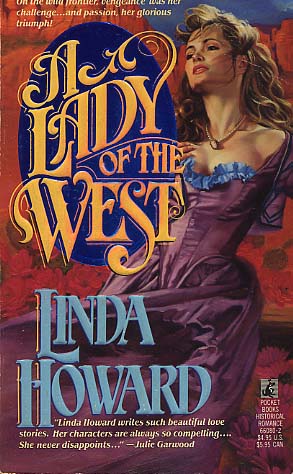 Share:
IN THE SAVAGE NEW MEXICO TERRITORY, LOVE COULD REDEEM... OR DESTROY

Victoria Waverly was a noble daughter of the war-ruined South, sold in marriage to a ruthless Western rancher. Only honor and pride could help her endure her painful role as wife in name alone. Yet honor. could not quench Victoria's forbidden desire for the hired gunman Jake Roper. His narrow gaze was hard as ice, but the tender emotions he could not hide promised to unveil to Victoria the glorious mysteries of love. Jake cursed his burning need for the graceful lady, for he wanted nothing to stand in the way of his drive to reclaim his ranch--Sarratt's Kingdom--the empire that was his legacy and obsession. But ancient wrongs and blazing passions would bind together the proud, aristocratic beauty and the lean, powerful cowboy. In a bloody Western land war they would fight for Jake's rich birthright... and seize at last the love that was their hope, their dream, their destiny!