A Cry in the Night — Mary Higgins Clark 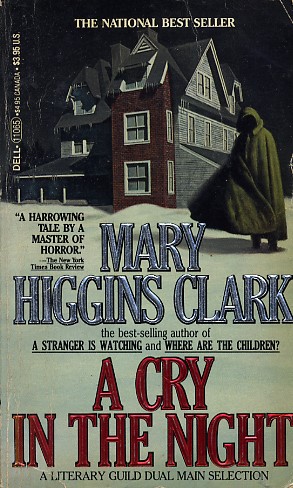 IT WAS THE SORT OF THING THAT HAPPENED ONLY IN FAIRY TALES....
One day she was simply Jenny MacPartland --young, charming, divorced, working in a New York art gallery, struggling to support her two little girls-- the next, she was a princess, at, lavishly courted by a handsome artist whose exquisitely peaceful landscapes were making him famous virtually overnight. Within a month, Jenny was married to Erich Krueger. She had found her prince, the man she could truly love.

UNTIL IT BECAME THE STUFF OF NIGHTMARE
Suddenly wealthy, adored, warmly cared for, Jenny knew she'd grow to love living on Erich's Minnesota farm. Until the lonely days and eerie nights strained her nerves to the breaking point.. . until bizarre incidents led her to doubt her own sanity... until a chain of shattering events revealed the link to a past more terrifying than she dared imagine--a past that threatened her marriage, her children, her life.
Reviews from Goodreads.com