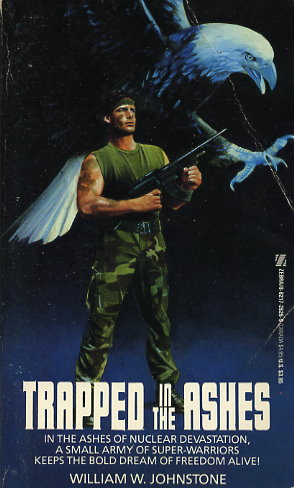 A FINAKL DESPERATE BATTLE AGAINST ALL ODDS

Out of the wasteland of an America blasted by nuclear holocaust arise legendary deeds of heroism. With their world a smoldering ruin around them, a few men of superhuman courage and skill fight on--grimly clinging to the shreds of hope for an America reborn. Such a man-is Ben Raines, the kind of man other men instinctively follow, sensing his power, his skill, and his determination.

Trapped in the smoking rubble of what was once New York City, Ben and his ragged band of followers are beset by overwhelming odds. The terrorist Khasmin is marching north to join the cannibalistic Night People and the forces of Sister Velora, with the final annihilation of Ben's holdout army/as their goal. Defeat seems a certainty. But Ben Raines has faced overwhelming odds and has made tough, crucial decisions before. Now, he must muster what forces he has to strike one hard, crushing blow or America will die, taking the last hope of freedom with it.
Reviews from Goodreads.com