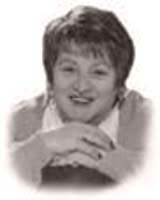 Anne Bushell was born on October 1938 in South Devon, England, just before World War II, and grew up in a house crammed with books. Divorced twice, she had two children. She worked as journalist at the Paignton Observer, but after her marriage, she moved to the north of England, where she worked as teacher. After she returned to journalism, she joined the Middlesbrough Writers' Group, where she met other romance writer Mildred Grieveson (Anne Mather). She started to wrote romance, and she had her first novel "Garden of Dreams" accepted by Mills & Boon in 1975, she published her work under the pseudonym of Sara Craven. In 2010 she became chairman of the Southern Writers' Conference, and the next year was elected the twenty-six Chairman (2011–2013) of the Romantic Novelists' Association.

Divorced twice, Annie Ashurst lives in Somerset, South West England, where she had several thousand books, and an amazing video collection. When she's not writing, she enjoys watching very old films, listening to music, going to the theatre, and eating in good restaurants. She also likes to travel in Europe, to inspire her romances, especially in France, Greece and Italy where many of her novels are set. Since the birth of her twin grandchildren, she is also a regular visitor to New York City, where the little tots live. In 1997, she was the overall winner of the BBC's Mastermind, winning the last final presented by Magnus Magnusson.

One Night With His Virgin Mistress (Oct-2008)

Innocent On Her Wedding Night (Oct-2007)


What Every Woman Wants