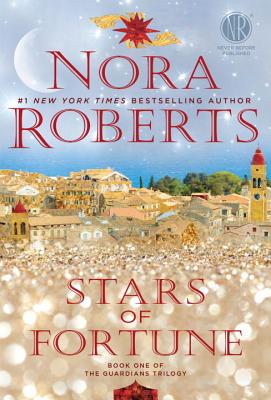 Sasha Riggs is a reclusive artist, haunted by dreams and nightmares that she turns into extraordinary paintings. Her visions lead her to the Greek island of Corfu, where five others have been lured to seek the legendary fire star, part of an ancient prophecy. Sasha recognizes them, because she has drawn them: a magician, an archaeologist, a wanderer, a fighter, a loner. All on a quest. All with secrets.

Sasha is the one who holds them together -- the seer. And in the magician, Bran Killian, she sees a man of immense power and compassion. As Sasha struggles with her rare ability, Bran is there to support her, challenge her, and believe in her.

When a dark threat looms, the six must use their combined powers -- including trust, unity, and love -- to find the fire star and keep the world on course.
Reviews from Goodreads.com

Six individuals are compelled on a quest to seek three stars before a dark threat possesses them and corrupts everything but in order to do that they will have to learn to trust and work together in this spectacular new paranormal romance. Nora Roberts has done it again, she has created another fascinating paranormal world full of unexpected twists, captivating characters and a truly compelling plot. There was no way that I could put the story down once I started reading it, especially with the astonishing surprises that I sure didn’t see coming and I can’t wait to join the Guardians in the next stage of their quest.

See my full review at:
https://www.nightowlreviews.com/v5/Reviews/Evampire-reviews-Stars-Of-Fortune-by-Nora-Roberts