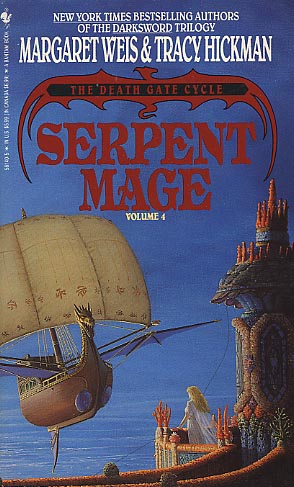 After searching the four worlds Alfred has at last found his people on Chelestra, the realm of sea. But his travels have taught him to be cautious ... and Alfred soon realizes his caution is justified, even among his own kind.

The one person Alfred can trust is, strangely, Haplo the Patryn. But Haplo's lord has decreed all Sartan to be the enemy, and Haplo dares not go against his lord. Now the companions have arrived in a land where humans, elves, and dwarves have learned to live in peace. Unaware of an even greater threat to all the realms, it is Sartan and Patryn who will disrupt this alliance of the lesser races in their struggle to gain control of all four worlds. Only Alfred and Haplo realize that they have a much older--and more powerful--enemy than each other....

THE DEATH GATE CYCLE
Millennia ago a battle waged between the Sartan and the Patryn. The Sartan split the world into four realms... then vanished. But now the two races have rediscovered each other through the magic of the Death Gate--and the war is about to rage anew.
Reviews from Goodreads.com