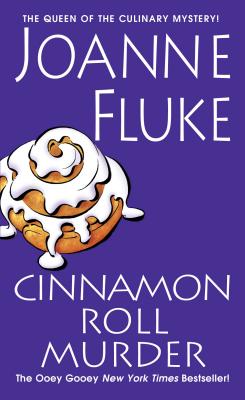 Spring has sprung in Lake Eden, Minnesota, and the mud season is turning Hannah Swensen's life upside down. But Hannah finds herself knee-deep in an even bigger mess when murder makes an unexpected visit to town...

April is a busy time for Hannah Swensen and her bakery; there's just something about the warm weather that makes folks in Lake Eden crave something sweet. When Hannah hears that the Cinnamon Roll Six jazz band will be playing at the town's Weekend Jazz Festival, she's more than happy to bake up a generous supply of their namesake confections to welcome the band to town.

Before the festival even begins, tragedy strikes when the Cinnamon Roll Six's tour bus overturns on its way into town. Among those injured is Buddy Neiman, the band's beloved keyboard player. At first, Buddy's injuries appear minor, until his condition suddenly takes a turn for the worse -- as in dead. Hannah's no doctor, but she suspects that the surgical scissors someone plunged into Buddy's chest may have something to do with it.

Once the investigation into Buddy's death begins, a slew of suspicious facts come to light. It turns out that Buddy Neiman isn't the victim's real name. In fact, no one is really sure who he is, or what secrets may be lurking in his past. Hannah also has her eye on a few local suspects. There's Doctor Bev, who seems to know more about the victim than she's willing to admit. And Devon Murphy, the aspiring young keyboard player who wanted a spot in the band so much, he just might have killed for it. Truth be told, Hannah isn't sure just how she'll unravel the mystery, but one thing's for sure: there's nothing sweeter than bringing a killer to justice...
Reviews from Goodreads.com

Joanne Fluke's Hannah Swenson series is long-running, and as many of these long-running cozy series are, it has become very similar and somewhat tired. But, having said that, I enjoyed this book a bit more than the last few. As usual, the recipes look fabulous, and I like the addition of Hannah's sister Michelle. They make an interesting duo because they are very similar in their tastes and interests. And we actually see some movement in Hannah's relationship with her dentist friend Norman. So, no, this book wasn't a waste of time, and the plot was somewhat interesting. I enjoyed the secret identities revealed aspect and I liked the interaction between Hannah and her friends. It's almost like visiting a fondly remembered old hometown where everyone appears to be familiar, and it's fun to catch up with the people that you knew a long time ago. Hannah and her crew are like that for me - fondly remembered friends.