After the Kiss — Joan Johnston 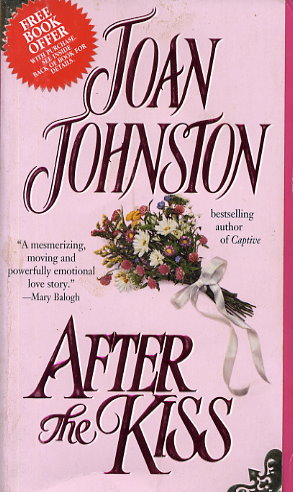 THE INNOCENT
Too tall and entirely too outspoken, Miss Eliza Sheringham grew up thumbing her nose at polite English society. So when Captain Lord Marcus Wharton, called Beau for his stunning good looks set his rakish sights on her, Eliza thought nothing of rejecting his advances. Until a stolen kiss swept her into the arms of a man to dangerous to love. . . .

THE BEAU
Called to battle, Marcus left behind the woman who had captured his heart -- and the scandal ignited by their kiss. His brother's disappearance made him Duke of Blackthorne, guardian of twin nieces who were rumored to be his own daughters. Badly scared in battle, the Beau had become the Beast of Blackthorne, a wounded animal destined to spend his life hiding in a shadowy wing of Blackthorne Abbey.

THE BEAST
When Eliza Sheringham showed up on his doorstep proposing herself as governess for the incorrigible twins, the Beast demanded marriage as the price of the job. He knew she could never love him. Surely his looks would drive her away -- now that he hungered for her more than life itself....
Reviews from Goodreads.com

Not her best, but a good read.