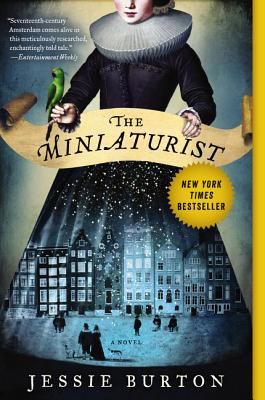 Set in seventeenth century Amsterdam -- a city ruled by glittering wealth and oppressive religion -- a masterful debut steeped in atmosphere and shimmering with mystery, in the tradition of Emma Donoghue, Sarah Waters, and Sarah Dunant.

”There is nothing hidden that will not be revealed . . .“

On a brisk autumn day in 1686, eighteen-year-old Nella Oortman arrives in Amsterdam to begin a new life as the wife of illustrious merchant trader Johannes Brandt. But her new home, while splendorous, is not welcoming. Johannes is kind yet distant, always locked in his study or at his warehouse office -- leaving Nella alone with his sister, the sharp-tongued and forbidding Marin.

But Nella's world changes when Johannes presents her with an extraordinary wedding gift: a cabinet-sized replica of their home. To furnish her gift, Nella engages the services of a miniaturist -- an elusive and enigmatic artist whose tiny creations mirror their real-life counterparts in eerie and unexpected ways . . .

Johannes' gift helps Nella to pierce the closed world of the Brandt household. But as she uncovers its unusual secrets, she begins to understand -- and fear -- the escalating dangers that await them all. In this repressively pious society where gold is worshipped second only to God, to be different is a threat to the moral fabric of society, and not even a man as rich as Johannes is safe. Only one person seems to see the fate that awaits them. Is the miniaturist the key to their salvation . . . or the architect of their destruction?

Enchanting, beautiful, and exquisitely suspenseful, The Miniaturist is a magnificent story of love and obsession, betrayal and retribution, appearance and truth.
Reviews from Goodreads.com

I had such high hopes for this book. It's not that the book isn't good, it's just that it wasn't quite good enough. I enjoyed Ms. Burton's style of writing, and her knowledge and understanding of her subject (seventeenth century Amsterdam) is impressive. I really enjoy it when an historical novel is as well-researched as this one so obviously was. But there is such a sense of unrelenting hopelessness in this story. I tried to look for a tiny glimmer of hope and light, and could not find it anywhere. The characters are mostly well-drawn, but a lot of the time I found there was a lack of humanity displayed by the characters in this book. I just couldn't warm up to them. And the one character that I hoped would tie this story together and that would bring some humanity into the main character (Petronella), never appears anywhere. The book is about the miniaturist, but we never meet this person and we never find out why or how she discovers the information that she requires for the miniatures she creates. We learn how family secrets can destroy a family. We learn that we never should take anyone at face value and we learn a lot about what life might have been like in Amsterdam at this time. This book would get five stars from me if there hadn't been so many loose threads left hanging and if there hadn't been such a sense of hopelessness and sadness. I read to learn about different places and different times. I read to increase my knowledge of subjects that I have not been exposed to before. But most of all, I read for enjoyment, and for the chance to find that silver lining that is usually somewhere in a novel. There was no silver lining at all in the unrelenting sadness of this book, and I was puzzled as to why the miniaturist never becomes a real character in the book. It is because of these two things that this book rates as four stars for me, instead of the five stars that I was expecting after reading the reviews about it.

The Miniaturist is the first novel by British author, Jessie Burton. Amsterdam in the late 1680s is a prosperous place for merchants of the VOC (Dutch East India Company). When eighteen-year-old Petronella Oortman, newly married to wealthy merchant, Johannes Brandt, arrives at his luxurious home on the Herengracht, she is nervous but expectant: surely her life can only get better now that she has left Assendelft.

But Johannes is absent, and his sister Marin is less than welcoming. When her husband finally returns, things do not go as Nella had expected. He does, however, bring her a remarkable gift: a replica of their home in miniature. She engages the services of a miniaturist to craft items to furnish this amazing creation, but is disturbed by the accuracy of certain extra pieces, pieces she did not order.

As Nella becomes familiar with the household, it is soon apparent that neither people nor circumstances are what they first seem, and that the life she had expected, and perhaps even hoped, for is unlikely to be the one she will have. Before long, she discovers the shocking truth about her marriage, learns disturbing facts about her husband’s business dealings, surprising truths about other household members and about the elusive but seemingly prescient miniaturist.

Nella begins to realise that while there is abundant prosperity, there is very little tolerance in this Amsterdam “Where the pendulum swings from God to a guilder”. Within three months, this young innocent country girl has to draw on reserves she was unaware she had, along the way witnessing a drowning, a stabbing and a sexual act, attending a funeral, seeing a man condemned to death, bribing a prison guard, and handling the sale of a valuable commodity.

As she weaves a fictional world around real life characters, Burton also provides the reader with a wealth of information about late seventeenth century Amsterdam. Her extensive research is apparent in every paragraph. How interesting to imagine a time when sugar was rare enough to be a valuable commodity, and to actually view Nella’s cabinet house in the Rijksmuseum.

Burton also treats the reader to some marvellously evocative descriptive prose: “A spray of red pimples covers the second man’s forehead. He’s little more than a boy. God has been malicious with his paintbrush” and “The threads of Nella’s imagination begin to spool, embroidering conversations, patches of which it stitches loosely together” and “There is water everywhere she looks, lagoons as still as glass, patched with murk like a foxed mirror when the weak sun moves behind cloud” are just a few examples. This amazing debut novel is a brilliant read. 4.5 stars 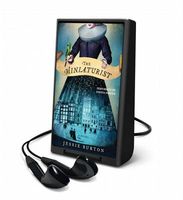 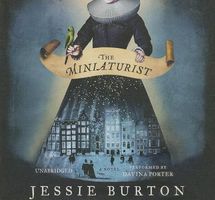 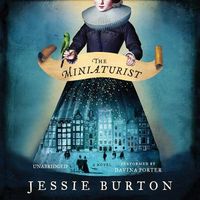