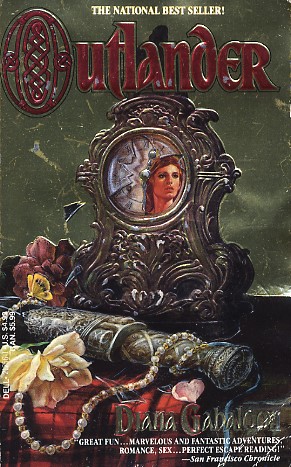 In 1945, Claire Randall, a former combat nurse, is back from the war and reunited with her husband on a second honeymoon -- when she innocently touches a boulder in one of the ancient stone circles that dot the British Isles. Suddenly she is a Sassenach -- an "outlander" -- in a Scotland torn by war and raiding border clans in the year of our Lord... 1743.

Hurled back in time by forces she cannot understand, Claire's destiny is soon inextricably intertwined with Clan MacKenzie and the forbidding Castle Leoch. She is catapulted without warning into the intrigues of lairds and spies that may threaten her life... and shatter her heart. For here, James Fraser, a gallant young Scots warrior, shows her a passion so fierce and a love so absolute that Claire becomes a woman torn between fidelity and desire... and between two vastly different men in two irreconcilable lives...
Reviews from Goodreads.com

***WARNING*** One of the characters is a victim to a rape. Written somewhat graphically. I felt you should know before you read.this book.

I cannot express the emotions that I felt during the reading of this book. Throughout the book, the author, Diana Gabaldon has you on a roller coaster of emotions as she unceasingly strings together one adventure after another. The last one third of the book caused my emotions to completely give in as I cried from there until the end of the book. Some of it happy, some shockingly believable and mostly heart racing. If you do not think that books can make you so emotionally stretched, you are wrong! cried A LOT! I was in the last third (perhaps half) of the book and read until 4 am. Went to sleep for a few hours. Woke up at approx 730 am and completed the book by 930 am. I am glad that a friend suggested reading the book and I sincerely suggest you do the same.

Outlander (also titled Cross Stitch) is the first book in the Outlander series by American author, Diana Gabaldon. Claire Beauchamp Randall, ex-army nurse, is on vacation in Scotland with her husband Frank, a historian. It’s 1946, and they are combining Frank’s quest for more information about his ancestors with the opportunity to reconnect after six years of wartime apart. Jonathan “Black Jack” Randall was apparently active in the area, back in the eighteenth century.

A visit to the Standing Stones at Craigh na Dun goes awry when Claire suddenly finds herself at the edges of a battle between the English garrison and the Highlanders. It becomes apparent that this is no longer 1946. And while the garrison commander looks like Frank, and claims to be Jonathan Randall, his behaviour soon has her grateful for her rescue by a Highlander. Her nursing skills bring her in close contact with an injured Scottish outlaw, Jamie Fraser.

Despite wanting desperately to get back to Frank in 1946, after four months, Claire is astounded to be married to Jamie, hunted by Randall and living in the primitive conditions of the eighteenth century. Even more surprisingly, she realises she is happy. But it is 1743, and Claire knows that the dramatic events of Culloden are not far off.

Gabaldon gives the reader a tale that is part romance, part adventure, part historical and part sci-fi. She manages to include a Highland Gathering, plenty of fights and battles, torture, flogging, imprisonment, a wedding, a childbirth, a reunion, a channel crossing, a very novel prison escape, an opium-fuelled mental healing, a witch trial, quite a bit of sex and perhaps even a touch of magic. Despite the 800+ pages that contain a wealth of information about the Scottish Highlands in the eighteenth century, the characters and the plot are so compelling that this page-turner that will have readers seeking out the second volume in the series, Dragonfly in Amber. Addictive. 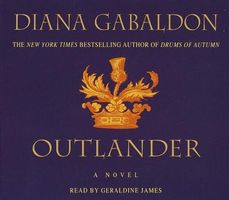 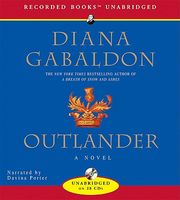