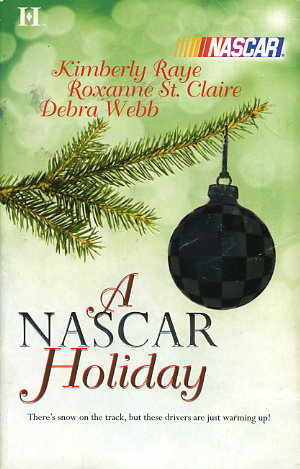 Although she's been hired to prove that drivers are serious athletes, Dr. Maxine Gray doesn't think much of NASCAR racing. So in the spirit of Christmas, driver Rush Buchanan is determined to show the good doctor the "rush" that racing -- and race car drivers -- can bring.
Reviews from Goodreads.com

A NASCAR Holiday Anthology
Ladies, Start Your Engines….by Kimberly Raye
Savannah Calloway was tired of living in her late mother’s shadow. Dressing, dieting, cooking to please her dad and brothers. Not to mention doing the office work instead of working in the pit like she wanted. No more. She offered her mechanical services to the competition.

Mackenzie Briggs accepted the help Savannah offered to give him to improve his car. She was one of those girls you couldn’t forget. Now she was under his car and could it be she was in his heart?

'Tis The Silly Season by Roxanne St. Claire
Clay Slater needs a family to please the sponsor of the ride he wants. If that’s the image they want he’ll give it to them.

Fresh out of a job and after promising her sons their first Christmas ever Lisa Mahoney agrees to pretend to be Clay’s wife. She needs the money and the boys need a Christmas.

You may want to have some tissues around for this one if stories hit your emotional buttons. Great story. The author continues the story of Shelby Jackson in the Harlequin NASCAR series book, Thunderstruck.

Unbreakable by Debra Webb
Rush Jackson really is a good guy but someone out there is trying to make him look bad. And worse yet it seems to be someone on the inside. Not to mention he’s struggling with an attraction to a woman who is so far removed from his world.

Dr. Maxine Gray’s life runs on facts, such as proving what activities are considered sports. When she is called to find the facts on race car drivers her world tilts. She finds herself struggling between sticking with the facts and being awed by Rush removing his shirt. What happened to the sensible woman she knows is inside her body?

Great story, once again shows how easily pictures can be made to tell a story that isn’t the truth. Also how opposites really do attract. The author continues the story of boss man Buck Buchanan in her Harlequin NASCAR series book, Danger Zone.
**Mild language
http://justjudysjumbles.blogspot.com/2013/05/harlequin-nascar-library-collection.html