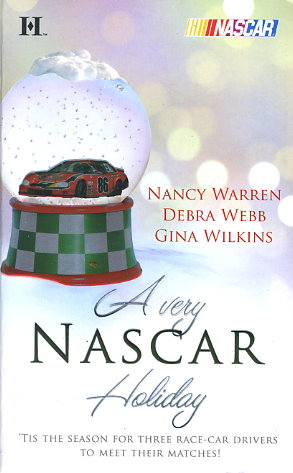 After a tragic mountain-climbing accident changed his life forever, NASCAR driver Jason Fewell hasn't been himself, on or off the track. So he heads into the wilderness to face his worst fears--and miraculously finds the one woman who can make him whole again. If only she didn't have secrets of her own.
Reviews from Goodreads.com

A Very NASCAR Holiday
Harlequin NASCAR Library
All I Want For Christmas by Nancy Warren
Emily Littlejohn is doing her best for her ten year old son, Darren. When he lets his hopes rise at winning a trip to spend time with his favorite NASCAR driver, Emily tries to keep him grounded on his chances of winning. Her son don’t know that same driver was his mom’s high school crush, although she didn’t believe he even knew she existed.

Jason Bane enjoyed driving and fans but deep down, he was still just a hometown boy. After they chose a winner for the contest he noticed a letter from his hometown in Minnesota, when the picture fell out of a young boy and his mom he knew that they needed to be part of the prize package as well.

Heartwarming story on believing in Christmas miracles, especially when Santa is involved.

Christmas Past by Debra Webb
Jason Fewell was able to do less and less in his life, fear gripped him. Three years ago there was an accident and the panic attacks have been getting worse. He still could get behind the wheel and drive his car, but how much longer before fear stopped that as well?

Molly Clark finally received her first assignment with the Colby Agency. Sadly it was nothing more than a babysitting job for a what would be a rich and spoiled celebrity, a NASCAR driver. Molly would help him get past his fears and do such a good job that her next assignment would be much better. She didn’t expect Jason to be such a nice guy, now what?

Debra has several series based on the Colby Agency, this is the only one in the NASCAR series, it looks like the others are part of Harlequin Intrigue.

Secret Santa by Gina Wilkins
R.J. Sanger, Rob to his friends, wants to follow his fathers footsteps and play Santa, not for publicity though. He never expected to have a beautiful Mrs. Claus and her adorable daughter as an elf.

Leann’s main focus in life was her daughter Kylie. She chose not to date so that Kylie wouldn’t get attached to some man just to have him walk out. She’s finding her rule is hard to hold onto the more she goes to charity events with Rob. He listens to both young and old, cares for her daughter and he’s incredibly handsome. Does she dare take a chance and break her dating rule?

This was such a heartwarming story. The author brings the characters to life and you can’t help but fall in love with them. All three stories were really good.
http://justjudysjumbles.blogspot.com/2013/05/harlequin-nascar-library-collection.html