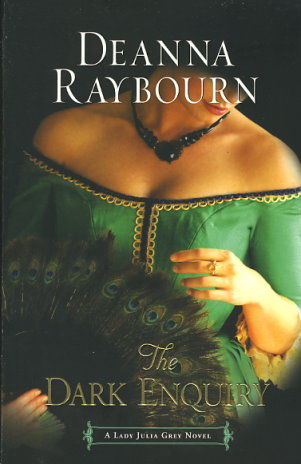 THE SPIRITS SPEAK OF SECRETS...

Partners now in marriage and in trade, Lady Julia and Nicholas Brisbane have finally returned from abroad to set up housekeeping in London. But merging their respective collections of gadgets, pets and servants leaves little room for the harried newlyweds themselves, let alone Brisbane's private enquiry business.

Among the more unlikely clients: Julia's very proper brother, Lord Bellmont, who swears Brisbane to secrecy about his case. Not about to be left out of anything concerning her beloved -- If eccentric -- family, spirited Julia soon picks up the trail of the investigation.

It leads to the exclusive Ghost Club, where the alluring Madame Séraphine holds evening séances -- and not a few powerful gentlemen in thrall. From this eerie enclave unfolds a lurid tangle of dark deeds, whose tendrils crush reputations and throttle trust.

Shocked to find their investigation spun into salacious newspaper headlines, bristling at the tension it causes between them, the Brisbanes find they must unite or fall. For Bellmont's sake -- and more -- they'll face myriad dangers born of dark secrets, the kind men kill to keep...
Reviews from Goodreads.com

The Dark Enquiry by Deanna Raybourn is the fifth book in the Lady Julia Grey series. In it we find that she and her new husband, the ever intriguing Brisbane, are embarking in new adventures both involving how they work together as detectives and in the way they relate as newlyweds settling into daily life for the long-haul back in London. We see the couple striving for balance in Victorian England during the rise of Germany as an enemy of the European continent post-Napoleon and pre-World War I, emerging Spiritualism and Evangelism movements, along with quickly advancing technology all of which bring additional angles and entertaining sub-stories along for this ride.

One of the reasons these books appeal to me so much although I usually read more contemporary romance and suspense is the truly modern way in which Julia approaches life, love, work and family against the Victorian Era setting. She chooses photography, a new art form and technology as a hobby instead of something more traditionally feminine. We never see her fretting over the household servants or being petty about who holds the power at home. Instead, she continues to involve herself in Brisbane's detective work putting herself in danger, and with each step we learn more about how their marriage is developing both between them as a couple and each as individuals. Without a spoiler alert, I must mention that we come to learn some surprising details about Brisbane's past and are set up anticipating learning more about what makes him tick. While Julia's character seems less complex and mysterious in comparison to Brisbane, the way in which Ms. Raybourne is developing Julia and her awakening realizations about just what she will really endure to keep Brisbane safe adds depth and dimension to her character. I do like that Julia's family and Brisbane's gypsy past are always part of the story. I like that fact that she didn't just get married and forgot about them and we get to see Portia as a new mom, Plum "in love", Belmont coming to terms with a mid-life crisis, and of course the paternal Mr. March acting as the somewhat over-bearing father in-law.

Deanna Raybourn is a master, providing insights into her characters that make sense for the reader and which make us care about the entire cast while at the same time fluidly keeping the mystery and suspense of the "whodunit" storyline moving along in a quite satisfying way. There is always a juicy twist in her plots and the Dark Enquiry doesn't disappoint. There is definitely room for a sixth book to continue to delight. The only downside for me with this series is waiting for the next installment.