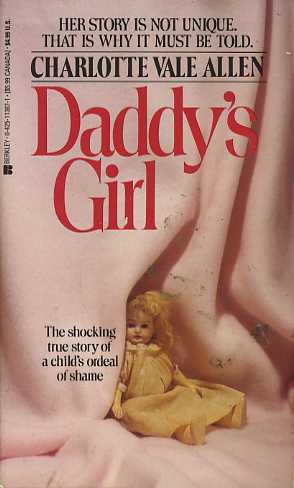 After I had been through many versions of the manuscript (written over almost a decade) I decided that for this book to have validity it would be necessary not only to show the past but also to give a picture of the present-illustrating how the events of my childhood affected me at the time, as well as later in life as an adult and a parent.

Given that I wrote the book in the first place as a document that I hoped would be useful to others who'd suffered abuse and also to professionals, I felt it was very important to present detailed portraits of the child I was and the woman I grew to be (in large measure as a result of trying to cope with the long-term effects of the abuse.) As well, I thought it was vital to illustrate how fallout from the abuse can be felt down through the generations, if one fails to exercise awareness and caution.

So the book weaves back and forth between past and present (the present being 1979, when the final version was completed). I also had to decide at the very start whether I was going to dole out snippets of truth or be completely truthful and address the issue as fully as I was able. There seemed no point to writing an autobiographical account of incest if I was going to be anything less than completely truthful. It was not difficult to tell the truth, nor was the writing of the book a cathartic experience, as many have imagined it to be. The fact is that I had long-since confronted my personal demons and had managed to relegate the past to the past-something exceedingly difficult for many victims of any/all forms of abuse to do.

A few years ago in correcting the page proofs of a new British edition of the book, I reread DADDY'S GIRL, and was gratified by what I'd written. (Often, with my novels, I am not at all happy when I reread them.) I think that as an author I have little, if any, objectivity about my work once it's completed and so am not necessarily a good judge of it. But I am proud of DADDY'S GIRL. Since its publication in 1980 it has been of help to a lot of people. And, ultimately, it's my way of returning some measure of the kindness and attention people showed me when I was working my way along the rough roadway toward my future.