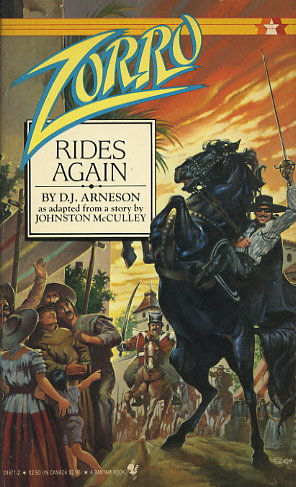 Share:
WHO IS ZORRO?
To the public he's a perfect gentleman--but secretly he's a master swordsman, sworn to uphold justice and defend the California territory. Zorro, who hides behind a mask of mystery--bold and brilliant, he's feared by all who break the law. A man of action and adventure, his legend rides before him.

Has Zorro gone mad? That's the rumor spreading like wildfire through Reina de los Angeles. For a dazzling swordsman wearing cape and mask is terrorizing innocent citizens. Riding with the night, he leaves the Mark of Zorro on his cruel deeds.
Already the governor has placed a price on Zorro's head, dispatching a cutthroat army led by the ruthless Captain Rocha to hunt him down. But Zorro's loyal band and a gallant Indian tribe refuse to believe the foul lie. Still, only one man can expose the truth--Zorro himself. With gleaming sword in hand, he must ride to defend his honor-- and unmask the evil impostor.