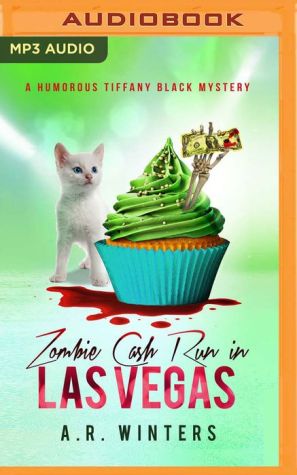 Who could've wanted to kill the reality show contestant? Was it someone on the crew - the womanizing director, the secretive producer, the helpful consultant, or a rival contestant?

When Tiffany's friend, Ian, insists on entering a zombie-themed reality-TV show, the duo stumble onto an unexpected murder.

Before they know it, they're embroiled in the investigation and uncovering all kinds of secrets - and being followed by a mysterious assailant. Ian and Tiffany must track down the killer before it's too late!

All while dealing with Tiffany's wacky family, and having a few cupcakes for good luck!

"Winters will have you giggling into your book!"

Zombie Cash Run in Las Vegas is the 12th book in the Tiffany Black in Las Vegas Mystery series. Though it can be enjoyed as a stand-alone, it's best in series order.

This is a humorous cozy mystery featuring a strong female protagonist, some unusual friends and family, and a mystery that needs solving! It has no graphic gore, bad language, or sex.