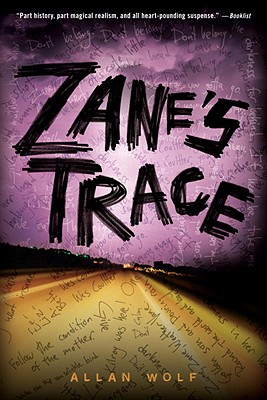 Share:
A coming-of-age road story with a supernatural twist -- and a compulsively readable poetic novel about identity and belonging.

Zane Guesswind has just killed his grandfather, or so he believes. So he steals the 1969 Plymouth Barracuda his long-gone father left behind and takes off on a manic trip to his mother's grave to kill himself. Armed with a six-pack of Mountain Dew, a jumbo pack of Sharpies (for scribbling all over the dashboard), and a loaded gun in the trunk, he's headed to Zanesville, Ohio, with no rearview mirror and no more worries. On the way, he meets Libba, a young hitchhiker who shares his destination, and other mystic and mysterious characters. With each encounter, and every mile marker he passes, Zane gets farther from the life he knows -- but closer to figuring out who he really is.