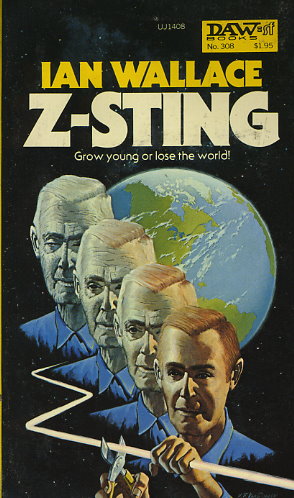 Share:
Croyd brought peace to a warring world by means of his Comcord system. When a nation's discord quotient rose to the boiling point, Comcord would trigger the ultimate peace weapon called Z-sting.

Z-sting would encapsulate the war-seeking nation, cutting it off totally from the world and from civilization. Comcord worked and peace had reigned for a century -- until an inexplicable rise in militarism blew the terror whistle.

It was up to Croyd who had created the system to find out what had gone wrong, but Croyd was by then a very ancient old mon. Aided by his great-granddaughter, he undertook to prevent the Z-sting trigger from being falsely activated. To achieve this, they had to:

Bring Croyd back his youth and vigor.
Uncover the motive behind the war crisis.
Find the trigger -- hidden at the edge of the Solar System.

The resultant novel is a vibrant and complex work of science fiction comparable to Ian Wallace's other great novels such as THE WORLD ASUNDER, DR. ORPHEUS, and A VOYAGE TO DARI.