Young Indiana Jones and the Mountain of Fire — William McCay 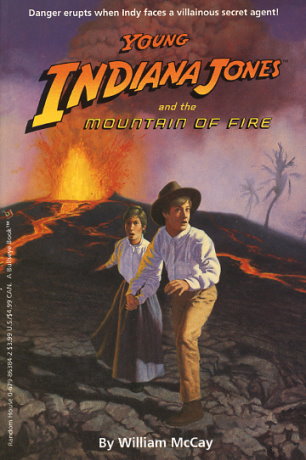 It's 1914, and Indy's marooned in Hawaii, far from the war in Europe. But even in these peaceful tropical islands, there are signs that something more than sunbathing and surfing is going on!

First, there's the mysterious appearance of Pele, the ancient volcano-dwelling goddess of fire. Next, there are the devious German spies roaming the shores. And then, there's Indy, determined as always to be in on the action. But when he and his friend Lizzie uncover a perilous plot to destroy British shipping in the Pacific, they find themselves headed toward the gaping crater of a deadly volcano!

Indy and Lizzie need a miracle to save them. In desperation, they turn to Pele -- but will the ancient goddess answer their call?