You Kill Me — Alison Gaylin 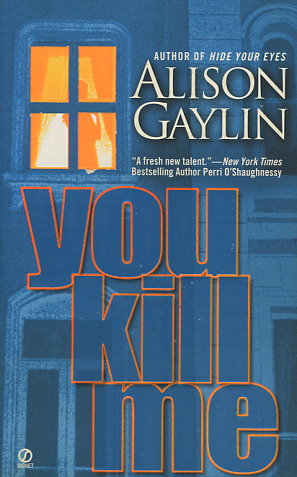 Is he a "sympathy vulture" -- or just a vulture?
Usually, Samantha Leiffer wouldn't be caught dead using one of her mother's cheesy catchphrases, like "sympathy vulture," to describe anything--especially not her ex-boyfriend. But since her self-help guru mom got her own radio show, those pearls of wisdom--broadcast everywhere--seem stuck in her head.

Is she "magically thinking" -- or in real danger?
Mom claims Sam sees danger where it doesn't exist. But Sam isn't so sure. Is her live-in boyfriend, detective John Krull, just quiet and remote or deeply troubled? Is her ex trying to be friends or stalking her? When a nerdy stranger gives Sam a note warning her of danger unless she calls him, she thinks he's just hitting on her--until one by one, people vaguely connected to her start getting killed.

And is someone trying to date her -- or kill her?
Suddenly Sam knows she's not imagining the murderer, who preys on the weak and waits patiently for death. With nowhere to run, Sam alone must confront an elusive madman who's all too real--and closer than she thinks....
Reviews from Goodreads.com