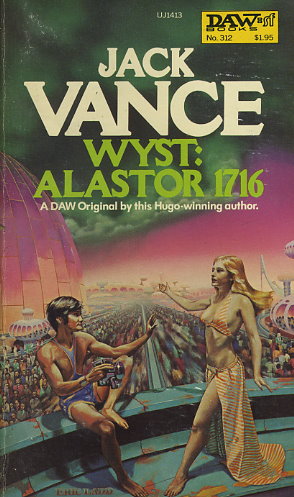 The trouble with Utopia is people. And this will remain true even in days to come, even in the Alastor Cluster of thirty thousand inhabited planets, whose sole protector of law was the mysterious person known as the Connatic.

On the planet Wyst, Number 1716 of the Alastor Cluster, there was such a Utopia, or so it claimed. There in one great city lived millions of people, sharing alike, working in absolute equality for just a few hours a week. But there was something decidedly cockeyed there and the Connatic finally sent a trusted investigator to bring back the facts even at the risk of his life.

Such is the basis of Jack Vance's latest novel, a kaleidoscope of color and concepts such as characterize his great novels. WYST:ALASTOR 1716 will delight his millions of readers. In the best Vance tradition that won him Hugos and honors, this new novel carries mystery, peril, and action as the strings that tie together its cluster of marvels.
Reviews from Goodreads.com