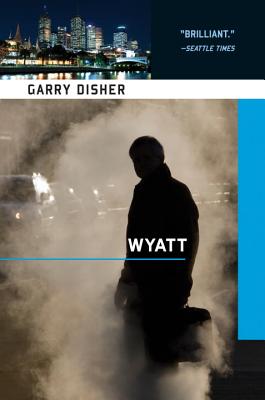 Garry Disher's cool, enigmatic anti-hero Wyatt has a job--a jewel heist. The kind Wyatt likes. Nothing extravagant, nothing greedy. Stake out the international courier, one Alain Le Page, hold up the goods in transit and get away fast.

Wyatt prefers to work alone, but this is Eddie Oberin's job. Eddie's very smart ex-wife Lydia has the inside information. Add Wyatt's planning genius and meticulous preparation, and what could possibly go wrong?

Plenty. And when you wrong Wyatt, you don't get to just walk away.

Taut plots, brilliant writing and relentless pace; plus an unforgettable cast, including the ever-elusive Wyatt himself: these are the hallmarks of Garry Disher's Wyatt series.
Reviews from Goodreads.com

Incredible as it may seem, I had never read any of Garry Disher’s Wyatt series, so I had no idea of the depth of reading pleasure in store for me when I started his latest offering, “Wyatt”.
Wyatt has been away; now he’s back. The plot begins with a planned jewel heist but takes many a twist and turn before the final page. Wyatt seems to be a crook with principles, but he doesn’t hesitate to kill if that’s what’s needed. And there are plenty of dead bodies strewn throughout this novel. The action is fast-paced and “the goods” change hands with dizzying frequency.
Disher is a master of description; this novel is full of realistic, down-to-earth, gutsy characters; the dialogue is razor-sharp. Wyatt’s theory about words: “The words had a job to do and were not to be squandered” could apply equally to Disher himself. He may be economical with them, but he certainly chooses the right ones and strings them together in a most satisfying order.
There are some delicious ironies: one set of thieves referring to the people who robbed them as “the thieves”; the robbing, at one stage, being done by a cop.
It is easy to see why this novel has won the Ned Kelly Award for Best Crime Fiction 2010. Readers will have difficulty putting it down. There was a 13 year hiatus between the last Wyatt novel and this one: let’s hope we don’t have to wait as long for the next one. This was my first Wyatt novel, but certainly not my last.