Wrong Side of Dead — Kelly Meding 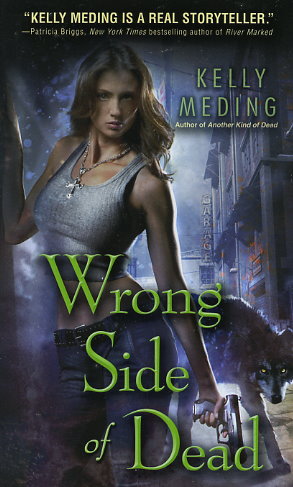 Monster hunter Evangeline Stone woke up on the wrong side of dead this morning -- and now there's hell to pay.

Barely recovered from her extended torture at the hands of mad scientist Walter Thackery, Evy can use a break. What she gets instead is a war, as the battered Triads that keep Dreg City safe find themselves under attack by half-Blood vampires who have somehow retained their reason, making them twice as lethal. Worse, the Halfies are joined by a breed of were-creature long believed extinct -- back and more dangerous than ever. Meanwhile, Evy's attempts at reconciliation with the man she loves take a hit after Wyatt is viciously assaulted -- an attack traced to Thackery, who has not given up his quest to exterminate all vampires . . . even if he has to destroy Dreg City to do it. With Wyatt's time running out, another threat emerges from the shadows and a staggering betrayal shatters the fragile alliance between the Triads, vampires, and shapeshifters, turning Evy's world upside down forever.
Reviews from Goodreads.com