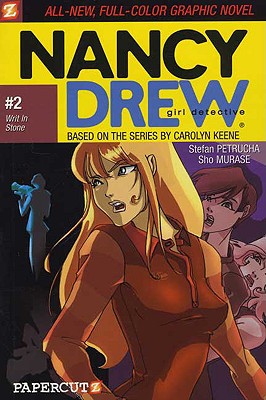 
It's double trouble for Nancy and her friends, when an ancient artifact and a little boy are both suddenly missing. The artifact is a piece of an old stone marker that may prove that the Chinese were in America eighty years before Columbus. The little boy is Owen Zucker, a sweetie who Nancy sometimes baby-sits. Nancy's determined to recover both the artifact and little Owen, but someone's out to stop her – permanently! Ages 8 to 12.
Papercutz is the exciting new graphic novel publisher that's building a huge following among the next generation of comics fans. Even the most reluctant readers are becoming addicted to the Papercutz approach of giving classic characters a modern makeover! Each Papercutz graphic novel features comics stories drawn in the style of the popular Japanese comics known as manga, and beautifully rendered with state of the art color. While educators rave about the high quality of the Papercutz writing and artwork, readers 8 and up are simply enjoying the great adventures found in each fun-filled volume. Be sure to check out other Papercutz titles such as The Hardy Boys, Zorro and Totally Spies.