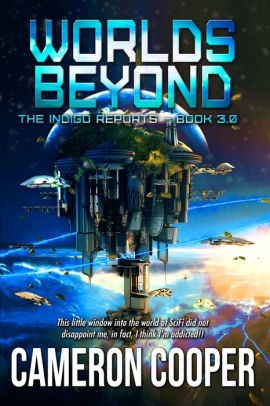 
Peace is balanced upon a knife edge...With the incomparable advantage of personal bridge forges and the elusive flying city, Demos, Bellona and her Ledanians have contained their rabid enemies, the Alliance, for more than a decade, preventing them from swallowing whole the hundreds of worlds who look to Bellona to preserve their freedom and peace. If the Alliance's relentless ambition to find a decisive advantage is realized, the delicate balance Bellona maintains would be destroyed, and the free worlds vulnerable. Rumours emerge from the Alliance-annexed states of a new type of bridge forge which might just be the tool the Alliance needs to defeat her...Worlds Beyond is the final book in the Indigo Reports space opera science fiction series by award-winning SF author Cameron Cooper.The Indigo Reports series:0.5 Flying Blind1.0 New Star Rising1.1 But Now I See2.0 Suns Eclipsed3.0 Worlds Beyond3.5 The Indigo ReportsSpace Opera Science Fiction Novel__Praise for Worlds Beyond:The story is unpredictable, the horror and pain is real. This is an epic saga!!The signature intensity and tension of the Indigo series is back!!!This is epic science fiction at its finest. Realistic far future worlds. Incredible characters and scenarios.Cameron knows how to tell a story, regardless of whether we are going back in history or forward in time.Until this book I had forgotten just how much I love good science fiction and Cameron's book is not just good, it's exceptional.This is a complex tale of planetary politics, plotting, spying, scientific marvels, and advanced androids. Plus there is the fascinating floating city of Demos.The concepts are staggering and intensely interesting.The Indigo Reports series is far more than I ever anticipated.This story is terrific! It's intriguing and futuristic and human in its telling.One of my favorite and most satisfying science fiction series to read. A series to devour.__Cameron Cooper is the author of the Imperial Hammer series, an Amazon best-selling space opera series, among others. Cameron tends to write space opera short stories and novels, but also roams across the science fiction landscape. Cameron was raised on a steady diet of Asimov, Heinlein, Herbert, McCaffrey, and others. Peter F. Hamilton and John Scalzi are contemporary heroes. An Australian Canadian, Cam lives near the Canadian Rockies.