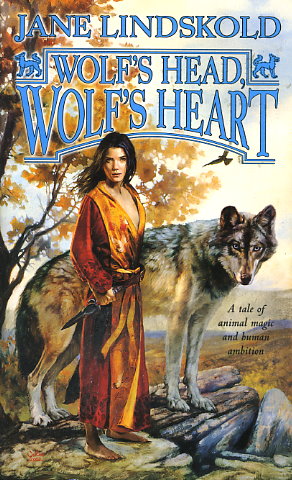 A tale of humane wolves, beastly men, and a brilliant heroine who must find her way in a dangerous world

Raised by intelligent, language-using wolves, brought back to human society at the court of Hawk Haven, young Firekeeper has had to learn to cope with humans and their complexities...and discovers that, for someone raised in a wolf pack, the politics of a royal court are neither complex nor wholly unfamiliar.

Now Hawk Haven and Bright Bay are unifying, threatening the balance of power in neighboring lands. New intrigues abound. The former rulers of Bright Bay, it appears, were hoarding a collection of forbidden magical artifacts...which Queen Gustin took with her when she abdicated, intending to use them to regain power. Melina Shield, a conniving, power-hungry noblewoman, is scheming to obtain them, and she's older, smarter, and more devious than the Queen. And the ancient and even-more-devious civil service of neighboring New Kelvin would like to get their hands on those artifacts as well...

All of which will make life very hard for Firekeeper. Because the Powers of the World have decided whose job it is to obtain these much-contended-for magical articles: Hers.
Reviews from Goodreads.com