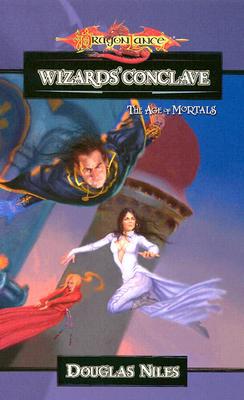 The War of Souls is over, and the gods of magic have returned to Krynn. The two most powerful wizards in the world, Dalamar of the Black Robes and Jenna of the Red, join forces to seek and enter the Tower of High Sorcery in Wayreth Forest. The Tower has been conquered by evil, and wizards everywhere are summoned for a high council -- the first new conclave.

The future of magic will depend on controlling wild sorcery -- and on the whim of a mysterious newcomer to the hallowed arts.

This title is the next in a series that explores the lives of key characters from Margaret Weis & Tracy Hickman's New York Times best-selling War of Souls trilogy. Wizards' Conclave describes events that directly overlap events during the War of Souls, and it features two lead characters familiar to any fan of the Dragonlance world.
Reviews from Goodreads.com