With This Heart — Red L. Jameson 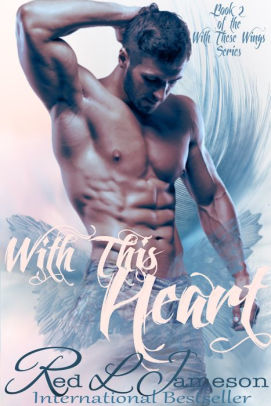 Talk about a killer kiss…

Being a former soldier with PTSD takes its toll on Aaron and has wiped him clean of optimism along with having dreams. But he’s no longer sure if he’s living in reality or fantasy after he tries to save a friend and finds his world filled with women who have wings and…Valkyries.

Adala kills. Not on purpose. She’s a Valkyrie—from just one touch, she takes warriors to the afterlife. Oh, but she’d give anything for a break, for normalcy, to have one day of not wearing her legionnaire uniform. When she’s asked to talk to the human Aaron to help him understand just what he’s in for when he tripped into her world, she jumps at the chance, even though she knows Aaron more than she cares to admit, even though she has an insane crush on him, even though she can’t touch him at all. But she gets to wear jeans and talk to a man—a real-life, hero of a man.

From her adorable made-up swearwords to when she wears his clothes, from the fact that she’s hundreds of years old to her pet Pegasus, Aaron falls hard for the shy Valkyrie. Dare he risk his life for a kiss? He’s thinking about it, because already he’s given her his heart.

With This Heart is a standalone story, that’s part of the With These Wings Series—books that mix rock-hard military men with feathered-fantasy femme fatales for a sizzling hot adventure to find love. Join Chanticleer winner, Red L. Jameson, for more of this heart-tugging fairy tale series.