With the Lightnings — David Drake 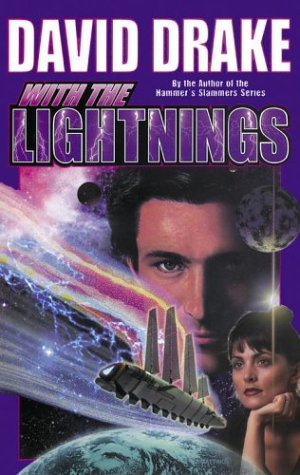 A FRIENDSHIP FORGED IN HELL!

Daniel Leary is a lieutenant in the republic of Cinnabar Navy with no money and no prospects since he quarreled with his ruthless, politically powerful father.

Adele Mundy is a scholar with no money and no prospects since her family was massacred for conspiring against the Government of Cinnabar.

Kostroma is a wealthy planet which depends on diplomacy to stay independent in a galaxy whose two great powers, Cinnabar and Alliance, battle for supremacy.

In a few hours, diplomacy is going to fail Kostroma. Daniel, Adele, and the scratch crew they gather aren't much to stand in the way of a powerful invasion fleet, but just possibly they're enough.

They have nothing on their side but each other--and heaven help whatever tries to stand in their way!
Reviews from Goodreads.com