With Each Passing Hour — Emma Bennett 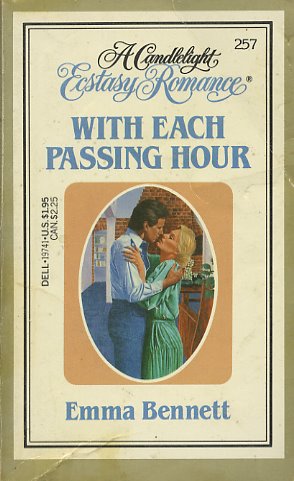 Artist Wendal Hunter had been deceived once in love. As far as she was concerned, once was enough. But Flynt Murdoch, the intriguingly powerful restauranteur and ranching tycoon, was a hard man to refuse.

Flynt was intent on breaking down her defenses. Wendal was determined to keep him at bay. Yet his rugged masculinity was a narcotic to her senses, and when he swept her into his arms, the last barriers were too easily broken. An irresistible lover, Flynt was, above everything else, a businessman. In spite of herself, Wendal had invested herself, body and soul. But was the bottom line just one more deal for the almighty dollar -- or a lifetime dividend of love?
Reviews from Goodreads.com