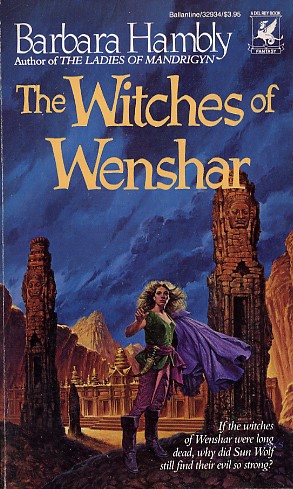 A Prevalence Of Demons

Once, it was said, Wenshar had been a city of witches, summoning and controlling demons for their evil magic. Wenshar had been destroyed, and the witches were supposedly no more. But in nearby Tandieras, Kaletha claimed to have found their lost books of spells.

Sun Wolf had come there with Starhawk, hoping to learn more of magic from Kaletha. As he had discovered in Mandrigyn, a talent for wizardry without adequate training was a doubly dangerous thing. And now, despite Kaletha's claim to use only pure, white magic, he found increasing signs of evil magic and demon-controlling spells.

Now Sun Wolf stood alone in the ruins of long-dead Wenshar. And as night fell, his wizard vision saw the demons emerge great swarms of demons, all striving to drive or lure him to his death. Wenshar was filled with new-old evil.

And it was no longer confined to ruined Wenshar!
Reviews from Goodreads.com