Wish You Were Here — Christie Ridgway 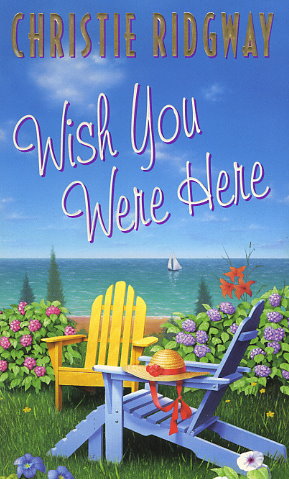 Well, we made it to the island in one piece, which is saying something for me these days. Deke says the island's rumored to be enchanted, but I'll believe it when I see it, if you'll pardon the pun. Though now I've met this woman, I'm wondering if he might be right.

Wish you were here...

As unofficial matchmaker for beautiful Abrigo Island, Zoe Cash practices her own form of no-risk romance. And when Yeager Gates arrives in town for a little R & R, Zoe decides that he'll be her latest project. But the secure world Zoe's created for herself is turned upside-down when she finds herself falling for the sexy fighter pilot.

Yeager's flying days might be over, but spending time on Mother Earth with tantalizing Zoe is putting him back on solid ground. Yeager makes no secret of the fact that his island stay is temporary, but when the time comes will he really be able to leave Zoe behind--for good?
Reviews from Goodreads.com