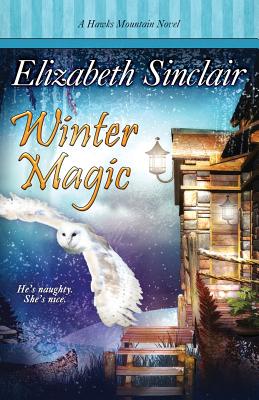 Share:
When Miranda said Jonathan Prince was movie star material, she hadn't been exaggerating. Nothing could have prepared Andi for his startling blue eyes or the way a wave of blue-black hair draped over his forehead, obscuring one finely-arched eyebrow, or the even, white teeth that flashed through his casual smile, nor the voice that danced over her nerve-endings like fingers on piano keys. Pretending to be Jonathan Prince's kind of woman was going to be easier than she'd expected.

He's naughty. She's nice. Will he believe her reasons for masquerading as her twin sister, the high-society party planner he hired to organize his charity fundraising gala? Or will he decide that this kindergarten teacher is just another beautiful woman who's willing to lie, cheat, and seduce her way into his bank account?

Christmas on Hawks Mountain is about to go from "apple cider sweet" to "somebody put moonshine in the eggnog."

Elizabeth Sinclair is the award-winning, bestselling author of numerous romance novels and two acclaimed instructional books for writers. Her novels have been translated into seven languages and are sold in seventeen countries. She lives in St. Augustine, Florida, with her husband and two dogs. Elizabeth is the mother of three children and brags constantly about her grandchildren.