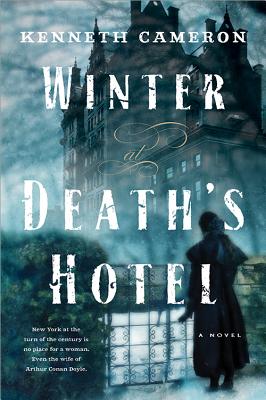 New York, January 1896. Arthur Conan Doyle, the renowned created of Sherlock Holmes, arrives with his wife Louisa at the Britannic Hotel in New York for his first American tour. While Arthur prepares his lectures, Louisa becomes entranced by the vibrant, dangerous metropolis brimming with debauchery and iniquity around every corner. When a woman's mutilated corpse turns up in a Bowery alley, Louisa recognizes the victim as someone she's seen in the hotel. Obsessed with the woman's gruesome death, Louisa starts piecing together clues to reveal a story of murder and depravity -- a story that leads back to the hotel itself and a madman who is watching her every move.

From Fifth Avenue's glitzy opulence to the smoky boy's club of the New York Express and the Tombs of Lower Manhattan, Winter at Death's Hotel is an electrifying tale of a society caught in the throes of a story transformation and one woman determined to redeem it at whatever cost.