Winning It All — Wendy Etherington 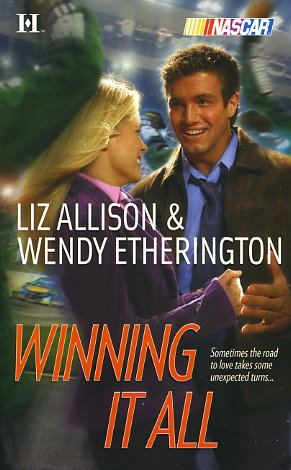 When a highway accident destroyed his dreams of defending his championship title, NASCAR driver Bryan "Steel" Garrison had to give up racing. Now he is president of Garrison Racing, and winning is still everything. He doesn't have time for the physical therapist his concerned family is foisting on him. Darcy Butler is too beautiful, too much a reminder of what he lost -- and won't let himself have.

Darcy Butler grew up in the NASCAR world, so she knows the famed Bryan Garrison won't readily admit to needing her help. That's fine with her -- as a widow, she isn't ready to get too close to another man. Until she helps Bryan realize that the only way to win it all is to heal his body...and his heart.
Reviews from Goodreads.com

Winning It All by Liz Allison & Wendy Etherington
The Garrisons Book 3
Bryan “Steel” Garrison is president of Garrison Racing instead of a driver thanks to an accident. He’s been brooding and in pain since then and why not? He lost not only his ability to race, but his wife left him for the competition.

Widow, Darcy Butler, may be small but she’s tough and determined to help Bryan. She not only changes what he can eat but pushes him physically as well. No one has to know that that she has her own personal struggles and she isn’t at tough as she looks.

This final visit with the Garrisons brings everyone back for one last thrill ride. The charming Cade and his tough as nails wife, Isabel. The smooth talking Parker and the matriarch Rachel along with their parents Mitch and Barbara. Mitch is coming out of his past mid-life crisis and sees all that he’s lost. I really enjoyed this trilogy and the characters who were brought to life in the three books, it’s always hard to say good-bye.
**Mild language
http://justjudysjumbles.blogspot.com/2013/05/harlequin-nascar-library-collection.html 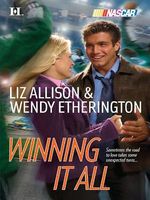