Winner All the Way — Eileen Goudge 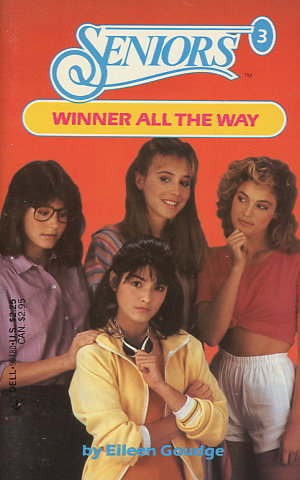 Sometimes winning is not enough ...

For lean, tawny Alex Enomoto, nothing feels better than a perfectly executed dive, one where she soars through the air and enters the water with razor-sharp precision.

Nobody understands this better than Alex's boyfriend, Danny, also a dedicated athlete. What Danny doesn't understand is Alex's need to succeed twice -- once for herself, and once for her brother, who's seriously ill.

Alex's competitiveness approaches obsession when she finds out that an Olympic coach Will be at her next championship meet. Alex's three best friends, Kit, Elaine, and Lori, are concerned about her single-minded pursuit. But Alex refuses to listen to their. She is determined to get what she wants -- even at the expense of Danny's love. She doesn't realize how much she stands to lose and that she's already a WINNER ALL THE WAY.
Reviews from Goodreads.com