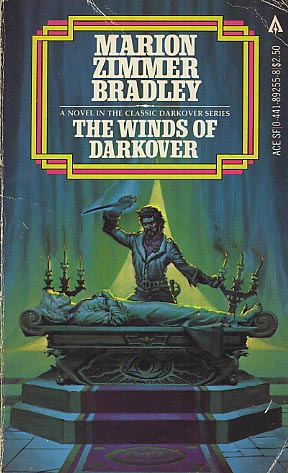 Turning under a blood-red sun, Darkover had always been a mystery to the Terrans. Its most puzzling riddles lay in the incredibly high mountains known as the Hellers. These jagged and almost impassable peaks sheltered races and enigmas that had become legend in the outside world--the howling inhuman Ya-men, the deadly Ghost Wind, the fiefs of barbaric brigand chieftains, decaying eldritch Dry-Towns ... and the eerie forces that were worshipped as gods.

Dan Barron was a rational and highly efficient member of the Terran Spaceforce--until nightmare visions drove him from the safety of the Trade City into the unmapped heart of the Darkovan mountain ranges . . . into an ancient battle that would shape the destiny of more than one world.
Reviews from Goodreads.com

in omnibus: A World Divided