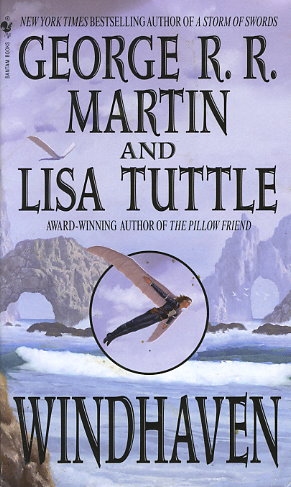 From New York Times bestselling novelist George R. R. Martin and acclaimed sci-fi, horror, and fantasy author Lisa Tuttle comes a classic and timeless tale that brilliantly renders the archetypal struggle between the ironbound world of tradition and a rebellious soul seeking to prove the power of a dream.

Among the scattered islands that make up the water world of Windhaven, no one holds more prestige than the silver-winged flyers, who bring news, gossip, songs, and stories. They are romantic figures crossing treacherous oceans, braving shifting winds and sudden storms that could easily dash them from the sky to instant death. Maris of Amberly, a fisherman's daughter, was raised by a flyer and wants nothing more than to soar on the currents high above Windhaven. So Maris challenges tradition, demanding that flyers be chosen by merit rather than inheritance. But when she wins that bitter battle, she discovers that her troubles are only beginning. For not all flyers are willing to accept the world's new structure. Now she finds herself fighting to preserve the integrity of flyer society against a revolution that threatens to tear apart the fabric of the world she fought so hard to join -- and to which she might be required to pay the ultimate sacrifice.
Reviews from Goodreads.com