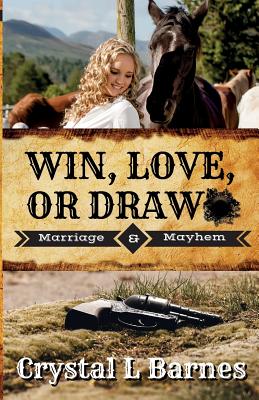 Catherine McGarrett is a strong woman. Life in Texas demands such. For five years, she has built a growing horse ranch while praying for the return of the one man who stole her heart and shattered it in a million pieces when he left.

Samuel McGarrett rides into Cater Springs, Texas toting two six-shooters and too many scars. The trouble and pain from the past erupts around the couple. And not just in their marriage.

Can Sam win Catherine’s trust? Will their love survive? Or will his final draw be his last?


Win, Love, or Draw is an exciting tale of forgiveness and reconciliation set in the Old West.
A clean, Christian, historical romance.
Reviews from Goodreads.com

This was such a powerful book! Five years ago, Katherine and Samuel were good - or so it seemed. But then he left.

And things will never be the same...ever again! Katherine isn't so sure that Sam's being back is a good thing. He broke her heart and left her pregnant. Now he wants to return to their husband and wife status. She has something big standing in her way, and doesn't want to end up pregnant and alone.

This isn't just a Pioneer book. It's a true western with a couple great shoot-outs, lots of suspense and action, and some great old-fashioned romance thrown in! The topic of sex was introduced (after all, they were a married couple), but very few details were given "(the most given was that he fell asleep after being with her). I thought the book was sweet and things were resolved nicely.