Wild Is the Night — Colleen Quinn 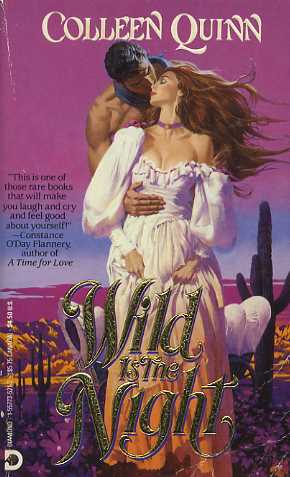 She hired him for protection--and discovered

Amanda Edison--a successful, but lonely, writer of penny novels, she concocted tales of passion and adventure ... though she had yet to taste the same excitement in her own life.

Luke Parker--the handsome gunslinger was hired to protect Amanda on her trek to Texas ... and found his traveling companion strangely beautiful, despite her know- it-all attitude. He was constantly infuriated by her talent for landing them in the most dangerous situations ... and undeniably intoxicated by her innocent yet seductive charms.

The magnetic attraction between them was both heated and powerful--but their differences seemed insurmountable. Until the day they realized their blazing desire could not be denied ...
Reviews from Goodreads.com