Why We Die — Mick Herron 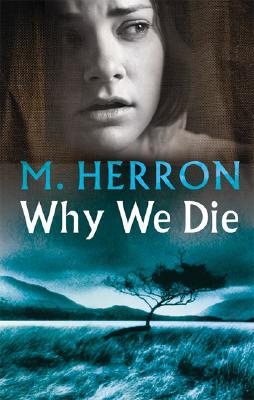 When Tim Whitby checks into a hotel, he's not intending to check out again -- but then he meets Katrina Blake, a woman in need of rescue. When Arkle, Baxter and Trent inherit the family business, they're not planning on making a go of it -- there are quicker ways of getting rich, if you're not squeamish about the violence involved. And when ZoÎ Boehm agrees to track down the the masked men who robbed Harold Sweeney's jewellery shop, she's hoping to pay off the taxes she's avoided. She's not expecting to wind up in a coffin. But Arkle has a crossbow; Tim has a life that's run out of purpose, and even battered Katrina has her secrets. And death, like taxes, can't be avoided forever.
Reviews from Goodreads.com

Why We Die is the third book in the Oxford Investigations series by British author, Mick Herron. The story starts with a widower, a debt-ridden PI and a bunch of thugs. Arkle, Baxter and Trent have decided they can make easy money, just not in the family gravel business. Tim Whitby, still grieving the loss of his wife, checks into a hotel, planning to check out (of life) but is distracted by a bruised-looking Katrina Blake.

And Zo√´ Boehm‚Äôs old red Nissan Sunny is stolen and set on fire, something arranged by someone she‚Äôs recently upset, meaning she has to resort to a borrowed orange VW beetle for transport. The same someone also arranged scrutiny of her finances by Inland Revenue, resulting in a bill of almost five thousand pounds, forcing her to take on an investigation for a crooked robbery victim.

Some tedious surveillance and an encounter with an unusual chauffeur gives Zo√´ the information she needs, but her interest is piqued, and she heads to Totnes to dig a little deeper. While there, she finds herself rescuing Tim Whitby from a crossbow-wielding Arkle with an apple.

In the action that follows, Zo√´ effects another rescue, is rescued twice herself, climbs up a wall, brandishes a chair, assists more than one assailant downstairs, kicks and king-hits, is knocked out by a torch and ends up shut inside a freezer. Several people are stabbed and the crossbow gets quite a workout. The hood ornament of a hearse plays an important part, and several people are seeking a certain bag with a lot of money in it.

As usual, Herron gives the reader a plot with some great twists and, of several red herrings, one that will have readers familiar with his style wondering if he has indulged in his tendency to kill off a regular character without qualm or hesitation. Fans will be eager for the fourth and final book of the series, Smoke and Whispers. Excellent British crime fiction.