Who's Holding the Baby? — Day Leclaire 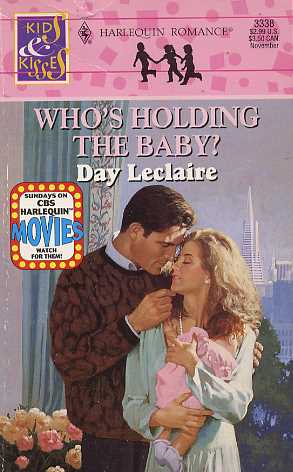 Grace struggled to control her temper. "You're missing the point. If the police had discovered we'd lied, they'd have thrown us both into jail. Darn it, Luc, how dare you involve me in your family problems?"

"Our problems," he reminded her in a soft, deliberate voice. "We're engaged. You told the police that, remember?"

"You have a choice. You can stay with me--posing as my fiancee--until my brother returns. Or you can turn your back on a helpless baby."

"You don't play fair!" she complained.

"No," he agreed. Then he smiled, a charming, dangerous smile. "I play to win."

Toni Donati -- She's only three months old and already she needs a score card. She's been put in her father's care, who's temporarily left her with his brother Luc, who's recruited his secretary Grace, who's pretending to be his fiancé, hoping to mollify the police, who've called the child welfare people, who believe that Grace and Luc are married.

Luc Salvatore -- Simply put, he's every woman's dream. And he loves women -- all women. Young and old, short and tall…well, you get the picture. He bowls them over like ninepins, including each and every secretary, Grace isn't falling. Which intrigues him. She intrigues him… And now that he needs Grace to pose as his fiancée so he can retain custody of his niece -- maybe he'll discover why.

Grace Barnes -- For a minister's daughter, this past year has been a revelation. Frankly, she didn't know she was capable of telling this many lies. Even her mousy appearance is a lie -- all in an effort to resist Luc Salvatore's attractions. And you know what? It isn't working! Especially now that she's staying with him, pretending to be engaged.