Whom the Gods Love — Kate Ross 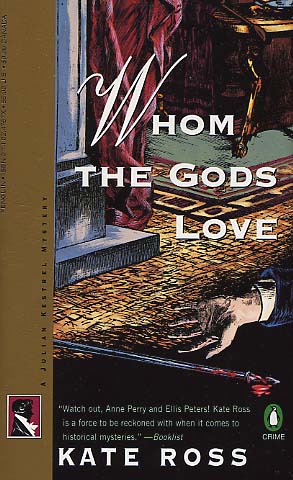 Alexander Falkland hasn't an enemy in the world. Young, talented, and charming, he shines in every field he enters: law, architecture, the investment market. But one night his luck runs out with a vengeance. In the midst of one of his famous parties, he is found with his head smashed, a bloodstained poker beside him. No wonder the inscription on his grave reads: Whom the Gods Love Die Young.

When the Bow Street Runners fail to solve the crime, Alexander's distraught father turns to Julian Kestrel, elegant dandy and intrepid amateur sleuth. Soon Kestrel is up to his ears in suspects--and enigmas. Who was Alexander, really? Social reformer or butterfly, devoted husband or rake? Kestrel must peel off one mask after another, until at last he discovers an Alexander no one knew--except, perhaps, the killer.
Reviews from Goodreads.com